What Happens When You Don’t Think You Can Actually Do The Things That Will Help Your Depression? 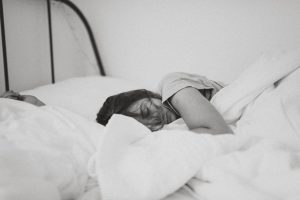 Thing is, it is hard to shake The Guilt for Not Doing the Things, when I’m constantly bombarded with messages to “Eat nutritious meals to feel better!” or “Did you know that exercise can sometimes  be as effective as antidepressants?” or “Hang out with your friends and family to brighten your mood!”. Depression seems to be sucking every ounce of energy/desire/joy that would normally motivate those behaviors.

Take a few months ago. I was living in a newer city, working from home and far-ish away from friends and family (aka more than a 45 min drive, which is considered too far by my Rhode Island-raised standards). I felt intensely lonely, but was feeling so sad and exhausted that I just didn’t want to talk to anyone else or go anywhere to meet new people. So, that’s what I did- I stayed and did nothing. And guess what also stayed? My depression. Ugh. I just simply didn’t have the motivation to do the things that had potential to help me.

It’s in this instance (one of many) that I am reminded of the concept of behavioral activation. According to this approach, it is OK that motivation isn’t there yet. Waiting for the magical motivation that would enable me to make all the friends and connect with old ones would be like watching a sloth climbing a tree – it would take forever. Instead, according to this approach, doing the action first (however small), even without motivation,  would eventually lead to more positive emotions and motivation. Essentially, action can lead to motivation, which can lead to more action, etc.

I put this to the test. Did I go out on an online Meetup and meet 12 new friends? Hell no. Too scary, too much effort. Instead, I made a time to Facetime with a good friend, and I went to a coffee shop and chatted with the barista. These small efforts gave me tiny blips of joy, small reminders of what life is like when my brain isn’t on fire. I continued to build on these small steps. Eventually, I reached out to kind-of-friends to make them real friends, *and* was able to garner enough motivation to sign up for a pottery class (because who doesn’t want a new mug AND new friends?? Win, win). It’s still a work in progress, but I’m taking baby steps.

I’m not saying this behavioral activation stuff is easy, because it isn’t. But I think the main idea here is that waiting for motivation to come will keep you waiting and waiting, especially with depression. Little steps, like the ones on our website (promo moment!) and ones you brilliantly come up with, are key to helping your brain be a bit less on fire. This is what our Cereal for Dinner community is all about – meeting you where you are, and supporting you in the small but real efforts you make toward feeling a bit better.

As always, we are in this together, and you are not alone.

The information in the content on this website, or otherwise provided to you (“content”) does not constitute medical advice. The views, opinions, strategies, as the case may be, (“views”) expressed in the content are those of the respective authors and speakers, none of which are licensed medical or healthcare professionals. You should always consult your own medical or healthcare professional before starting or otherwise undergoing a course of treatment. Any examples used in the content are generic, hypothetical and for illustration purposes only. In no event shall Cereal for Dinner or any of its directors, officers, employees or agents be liable for any use of, for any decision made or action taken in reliance upon or for any inaccuracies or errors in, or omissions from, the information in the content.

Cereal for Dinner is not an emergency crisis service. If you or someone you support is in crisis, please visit the Crisis page for resources to access.

YOu + US = Lives improved

Every dollar donated to Cereal for Dinner allows us to reach ~1 additional user to the website. This can provide that user with the support, information, and judgement-free community they need to cope with depression.

All donations to Cereal for Dinner are tax-deductible